A Mellow and Fragrant, Organic Dark Shoyu That Aged In a Cedar Tub 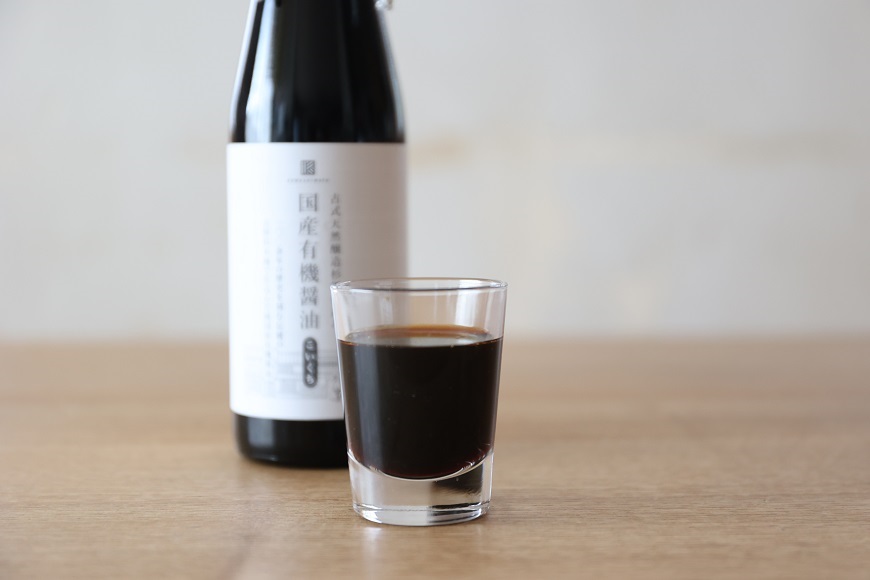 The domestically produced organic shoyu, which is carefully made from safe ingredients, has a rich flavor that will transform your normal dishes.

The mellow flavor brewed by aging in a cedar tub for over a year and the sense of security that's made without salts based on carefully selected organic and domestic ingredients.

To combine both of those points, the skilled craftsmen have spared no effort to create this soy sauce gem.

We are pleased to inform you that Organic Shoyu Soy Sauce (Koikuchi) 900ml is now available on Amazon USA. Click the link to see the product! 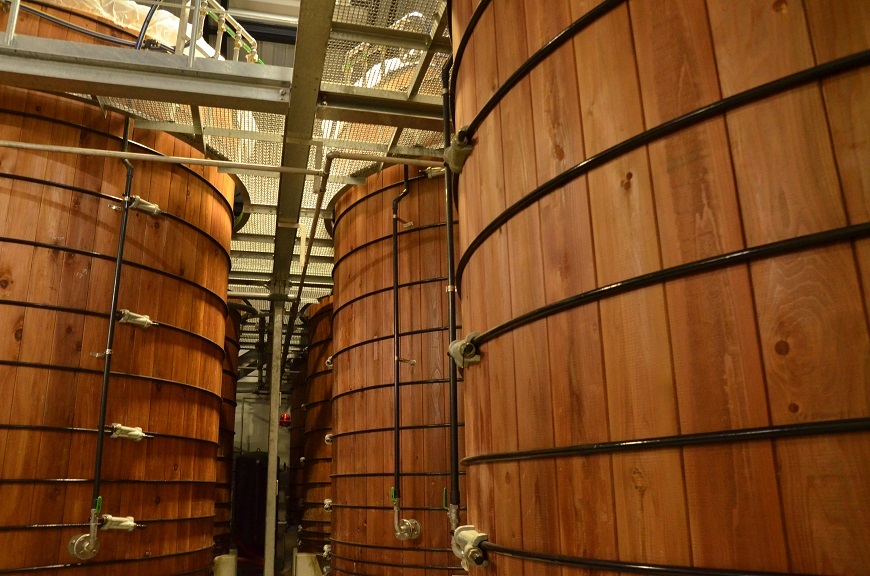 Kawashimaya's domestic organic shoyu is made by traditional cedar tub natural brewing, including the cedar tub that has been passed down since 1902.

Cedar tubs, which have been used to make shoyu since ancient times, have been steadily decreasing due to incompatibility with cost-effectiveness. It is now said that making shoyu in cedar tubs is less than 1% of domestic shoyu production.

Lactic acid bacteria and yeasts settle in the cedar tub used to make shoyu for a long time and bring out the unique aroma and taste of the brewery, which deepens the flavor. It is also scientifically proven that glutamic acid, an umami ingredient, increases by adding shoyu in a cedar tub. 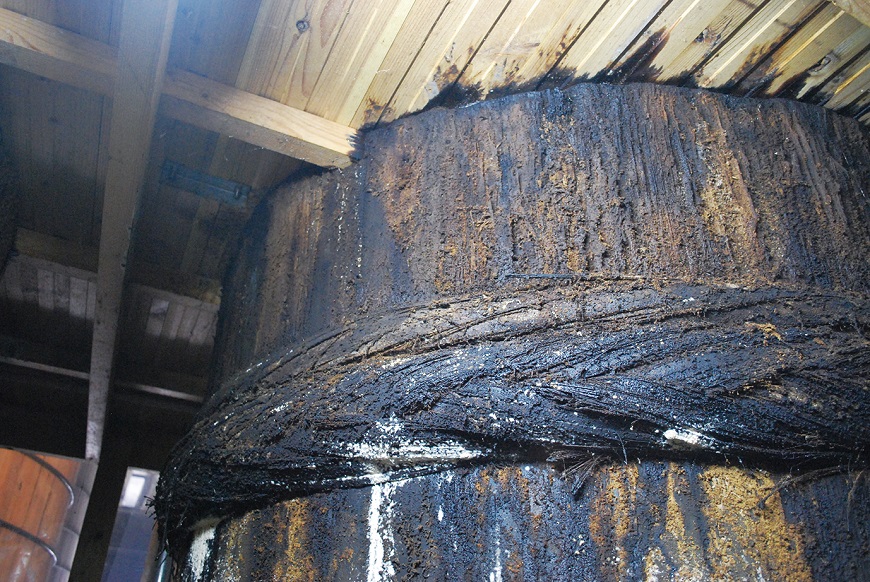 That's why we continue to adhere to the ancient Japanese natural manufacturing method using traditional cedar tubs where the bacteria that have grown delicious shoyu for over 130 years have settled down. 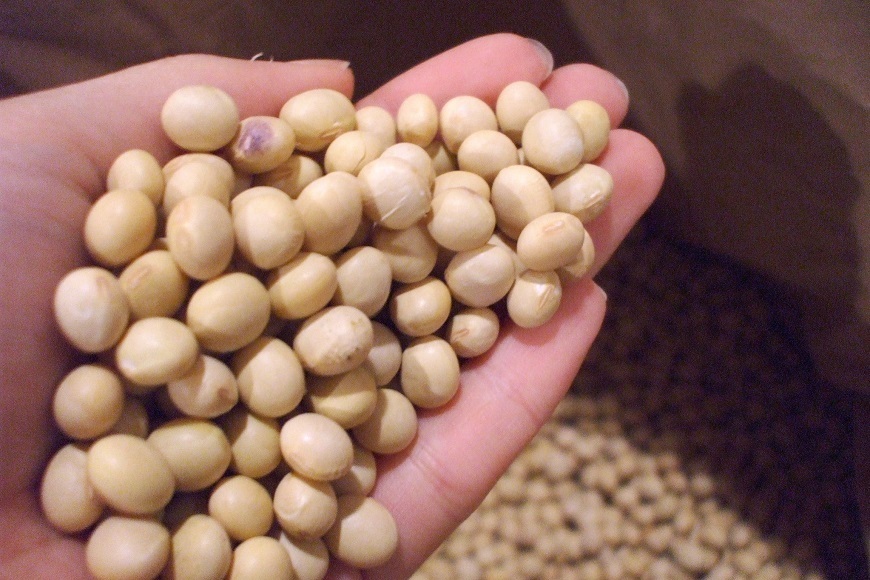 About 97% of Japanese shoyu is made from overseas soybeans and fat-processed soybeans (flake-shaped soybeans excluding oil). Still, Kawashimaya's domestic organic shoyu is less than the remaining 3% of domestic soybeans. It is made using high-quality organic soybeans grown by Japanese farmers with magnificent care. Similarly, for wheat, we use only carefully selected wheat that is organic and domestically produced. 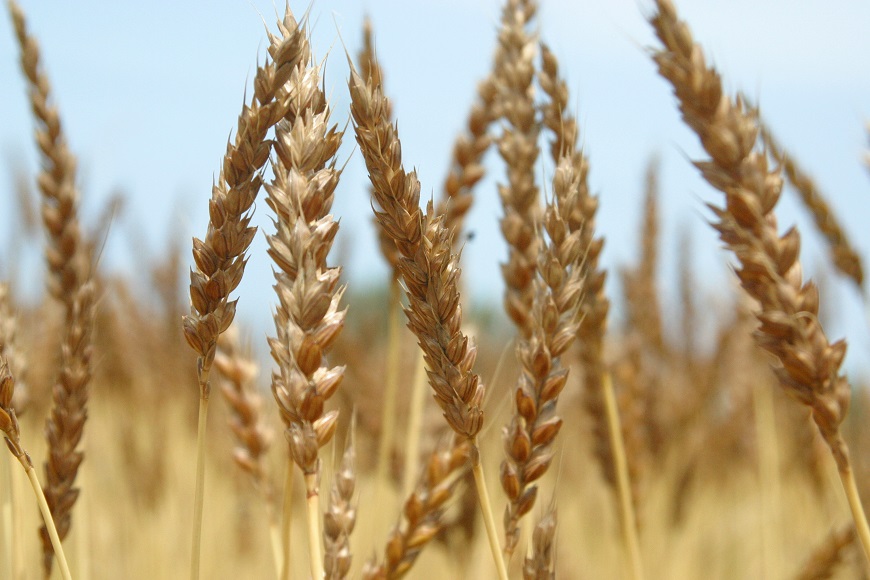 Seawater salt, which uses 100% seawater from Ako, Hyogo Prefecture, the home of salt, gives the soy sauce a deep salty taste and mellowness without horns and helps fermentation and aging. 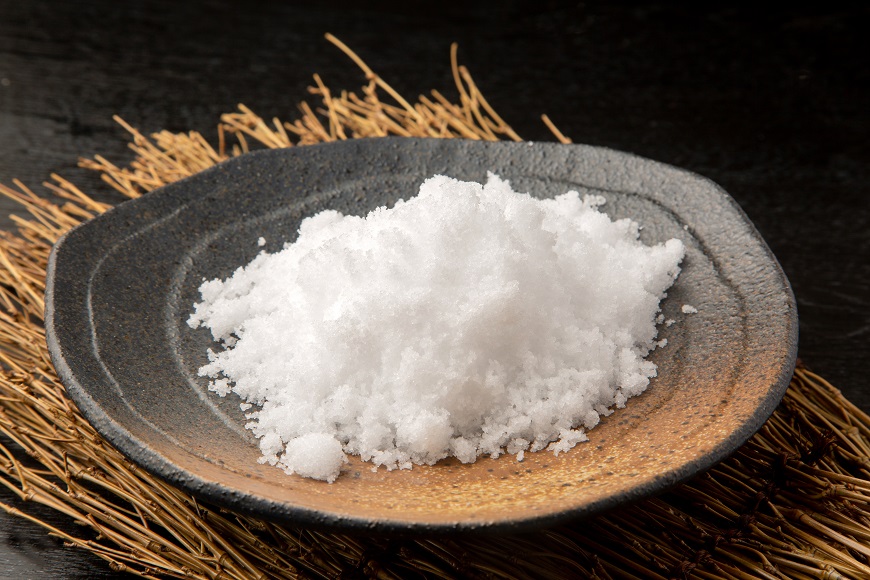 The famous water of the clear stream Sugihara River in Kita-Harima, Hyogo Prefecture, which is used as the water for preparation, gives the shoyu a soft texture. 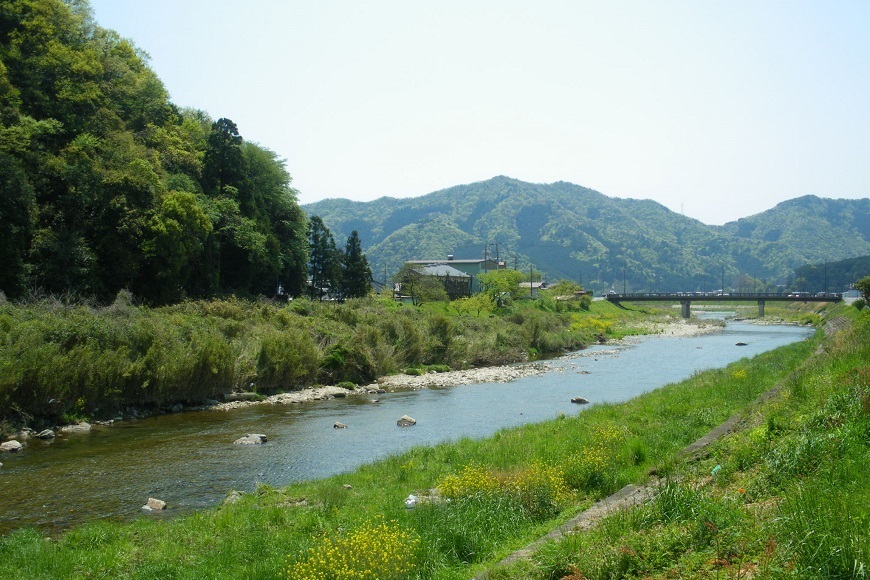 To ensure the shoyu was made with safe ingredients, the domestic wheat used during the production was well-evaluated as safe raw ingredients according to Residual Pesticide Inspection, Heavy Metal Inspection, and GMO (Genetically Modified Organism) Inspection issued by SGS Japan.


This shoyu is the suitable pick for those particular in choosing safe raw ingredients for everyday use soy sauce. Please use it every day without worry.

It is said that dark soy sauce accounts for 80% of the total consumption of soy sauce nationwide, and it is a perfect soy sauce for everyday use that goes well with anything from soy sauce to cooking. 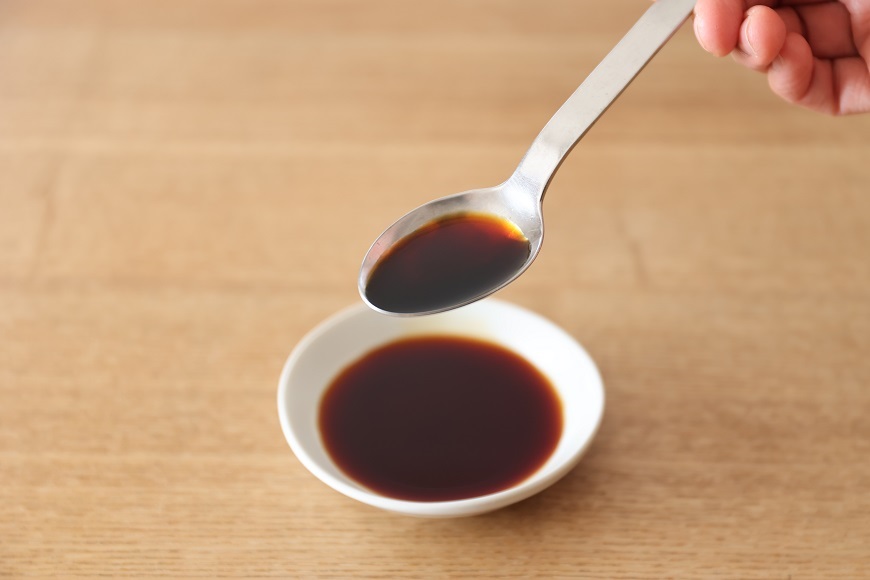 The beautiful and transparent reddish brown color, which is said to be "a proof of delicious soy sauce," and the mellow taste that is carefully brewed with high-quality raw materials. This is a characteristic of "real soy sauce". 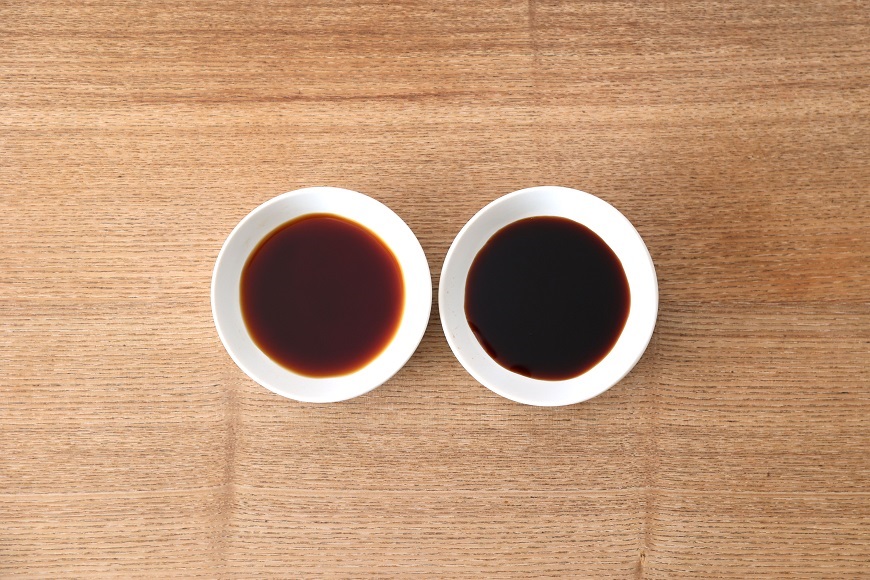 The beautiful and clear color stands out even when compared to the commercially available dark soy sauce (right).

Enhance Your Normal Quality Dishes with Just One Shoyu

Good quality shoyu complements the ingredients, so you can only feel the difference in aroma and umami when you use it in your daily cooking.

Just add a little shoyu to your simple side dish, the taste of "real" shoyu will be significantly enhanced, and the satisfaction of your daily dining table will be intensified! 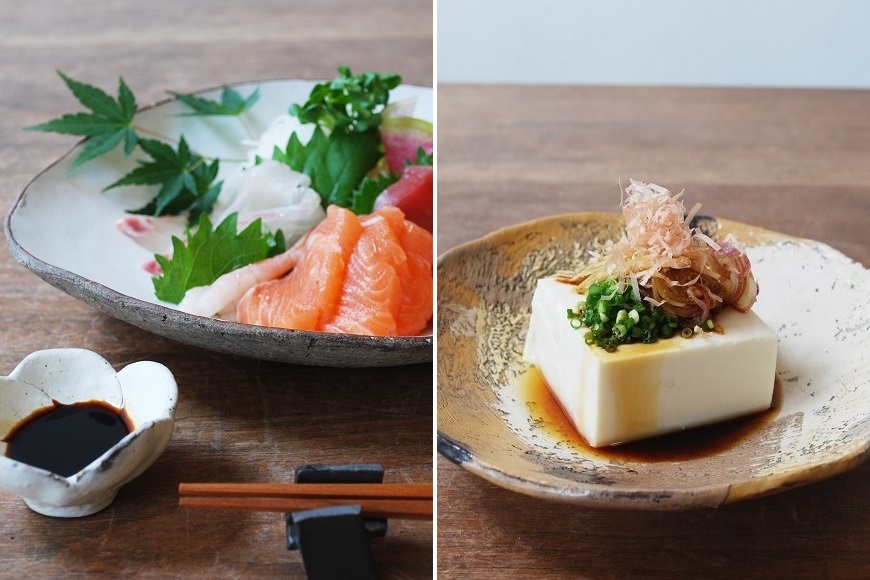 The deep taste of domestic organic shoyu goes well with the richness of egg yolk. 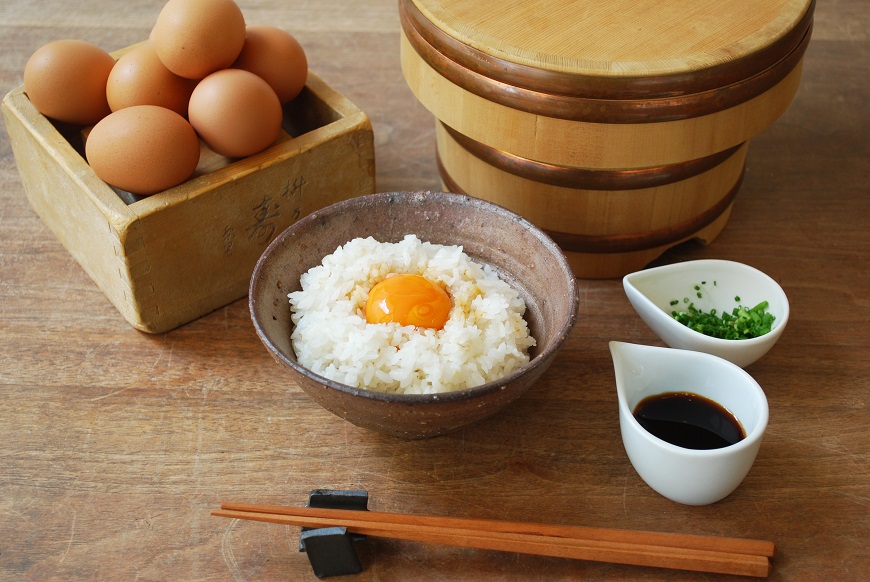 In addition, the fragrant shoyu scent will complement the ingredients just by hanging it on grilled fish. 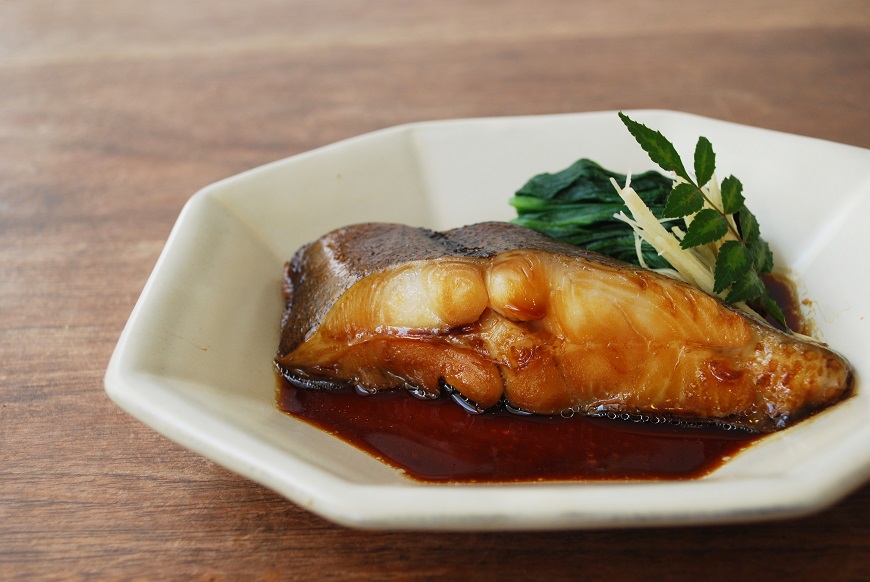 The richness of authentic shoyu adds depth to the dish. Frequently made stir-fried and simmered dishes have a deep taste that you won't get tired of.

Shoyu is indispensable for everyday cooking, but somehow, it plays a supporting role in supporting the main dish as well. Occasionally, why don't we enjoy the rich flavor of a recipe with shoyu as the main character?

Tuna with Garlic and Shoyu Pasta 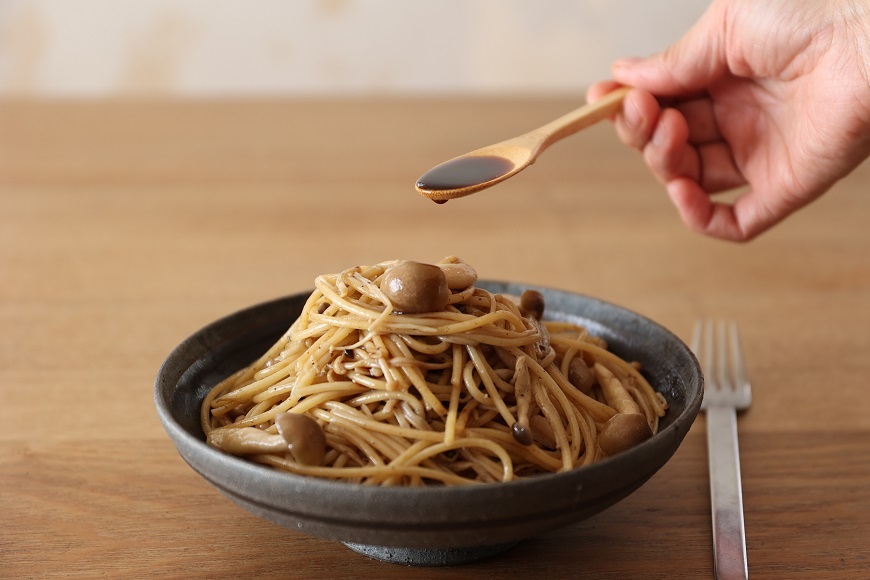 The main dish, where you can enjoy the presence of high-quality shoyu with a small amount of ingredients and without spending your time. Really suitable for busy people.

Garlic chives, which represent flavored vegetables, are combined with fragrant soy sauce to create an appetizing seasoning. Just add it to your usual dishes such as tofu, natto, salad, and rice with eggs to make it a very satisfying dish.

The deep rich shoyu serves as the basis for a harmonious sauce and eliminates odors. Even a simple sautéed fish or meat will be a luxurious dish with a deep taste!

The Reason Why it's not Low-salt Shoyu 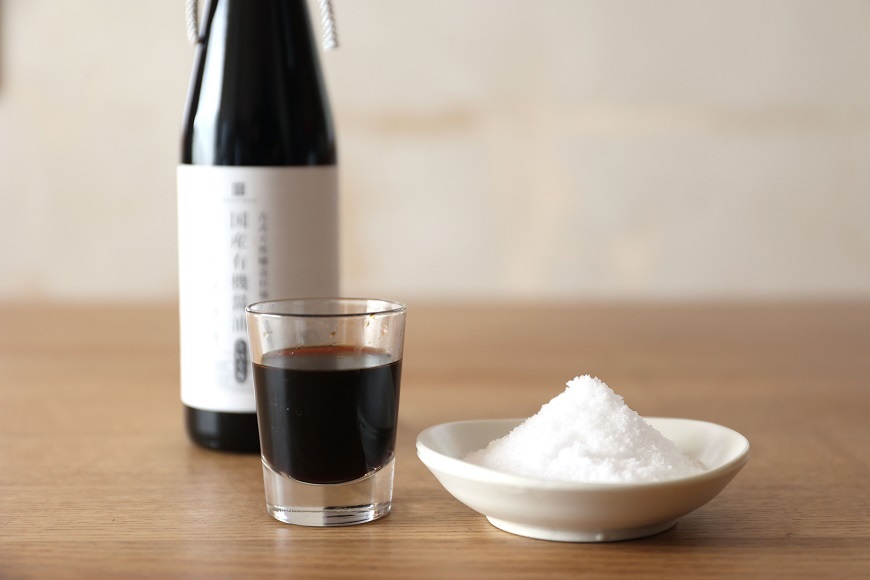 Even with additive-free shoyu, you can reduce salt intake by adjusting the amount of shoyu used for cooking.

Shoyu Making Process That Spares No Effort, Even From Step One

Koji making, which is the key to shoyu brewing, takes time and effort, so the number of breweries that make their own koji is scrimpy, but we carefully selected it based on the belief that good shoyu can't be made without good koji. We are particular about shoyu brewing, which uses carefully selected wheat and soybeans, taking 40 hours to make koji. 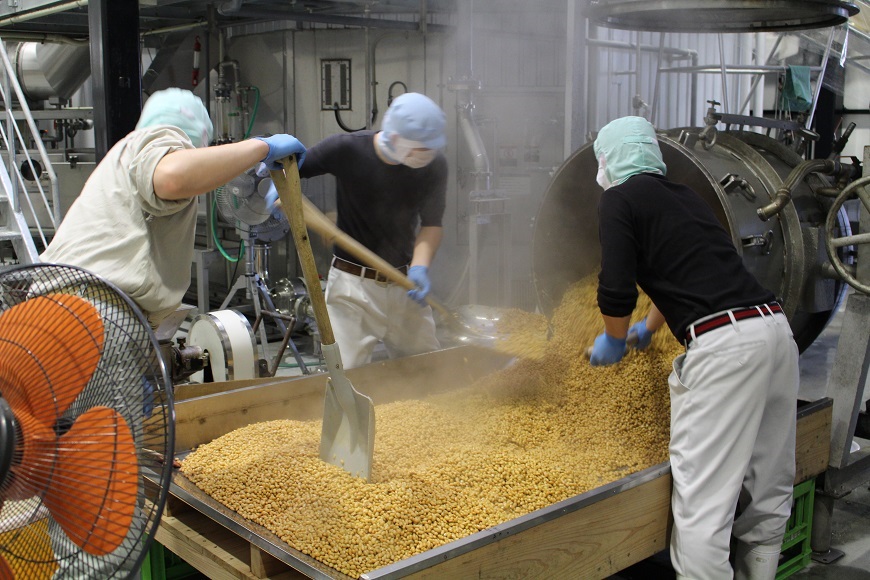 Koji making differs depending on the temperature and humidity, wheat and beans, so it is always a serious game. 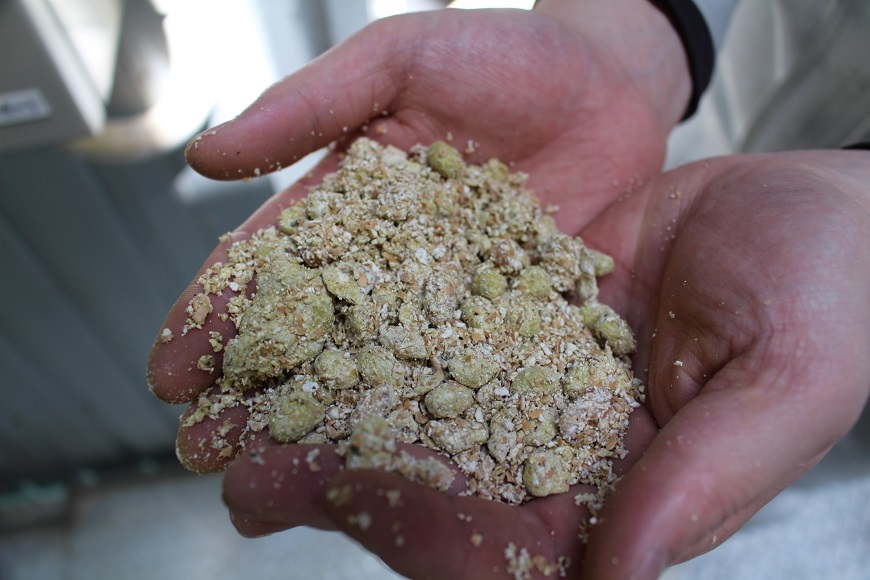 (* The photo is shoyu koji)

Mix the finished koji with saltwater and put it in a traditional cedar tub. To adjust the lactic acid bacteria and yeast that brew the shoyu, manually stir while checking the degree. 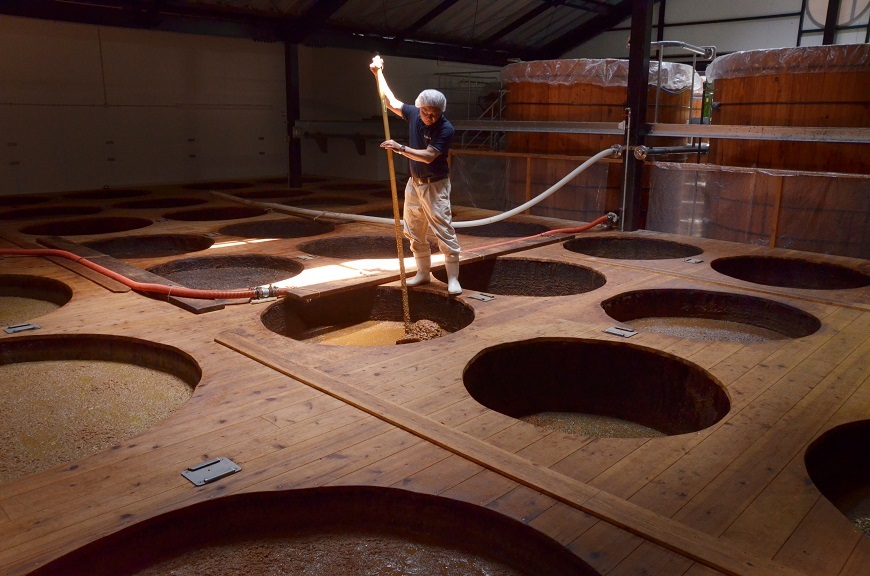 Without artificial temperature control, it takes more than a year to slowly ferment the mash with the power of nature to create a mellow flavor. 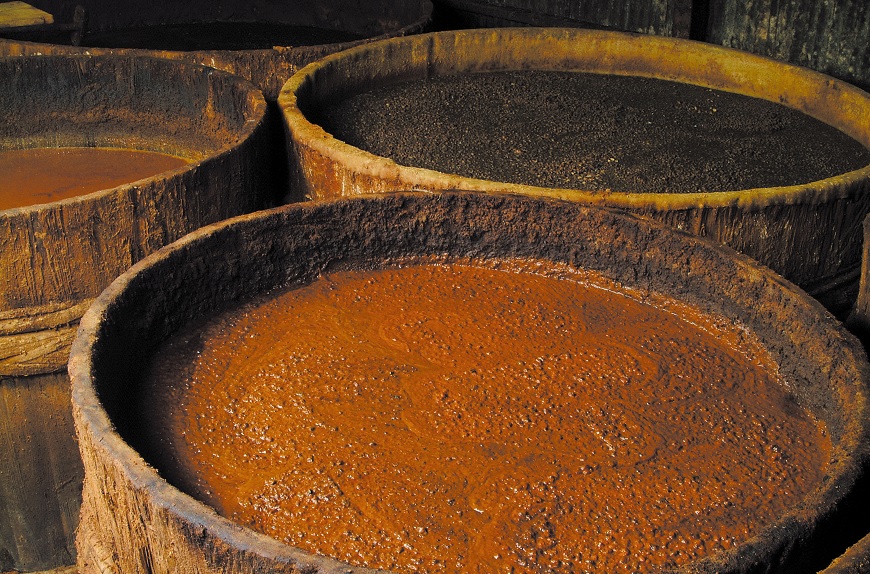 Put the finished mash on a squeezing machine and carefully squeeze the shoyu. Finally, it's sterilized by heating and then bottled to make the special domestic organic shoyu. 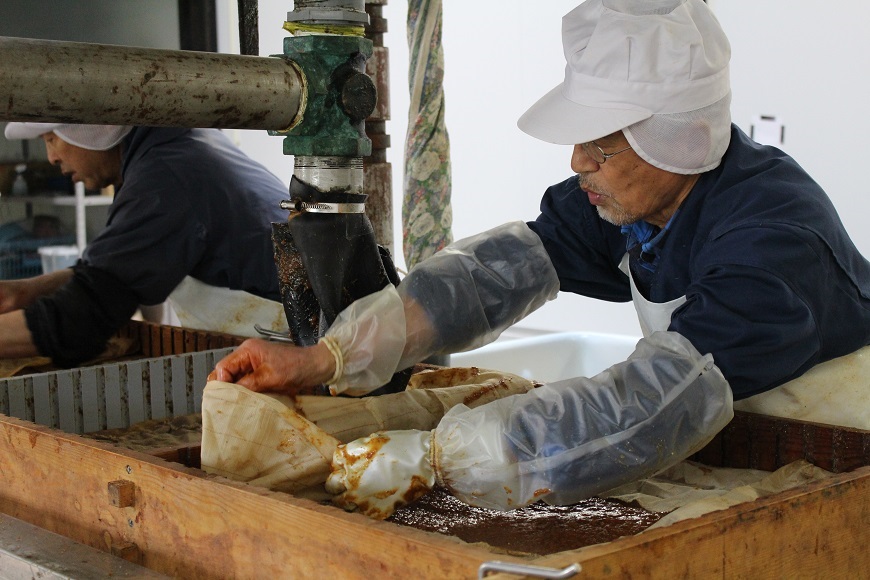 Founded in 1902, In a Traditional Brewery

At the foot of Mt. Sengamine, a mountain village where the water of the famous Mizumatsugai flows. Adachi Brewery has been brewing shoyu and miso there since 1902. 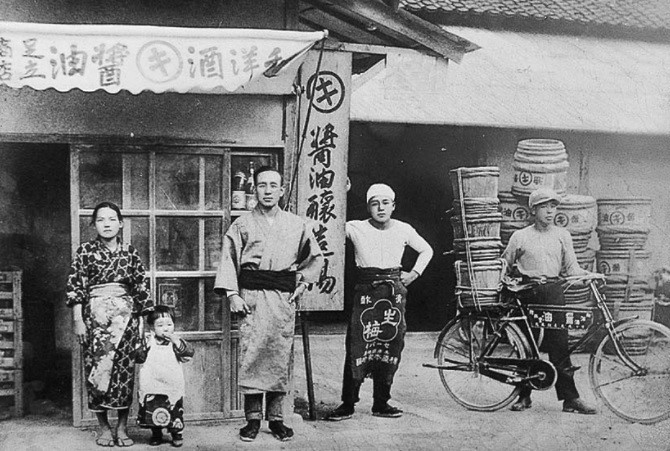 Carefully selected the safe and secure raw materials from its inception, "don't forget the basic, no-nonsense in, we want to present our time and effort to provide a safe and delicious shoyu" in the old-fashioned recipe that doesn't use additives as much as possible.

We are still working on delivering shoyu while carefully inheriting this idea, which has been over 130 years since our founding.

Delivering the Japanese tradition of "Cedar Tub Shoyu to the World 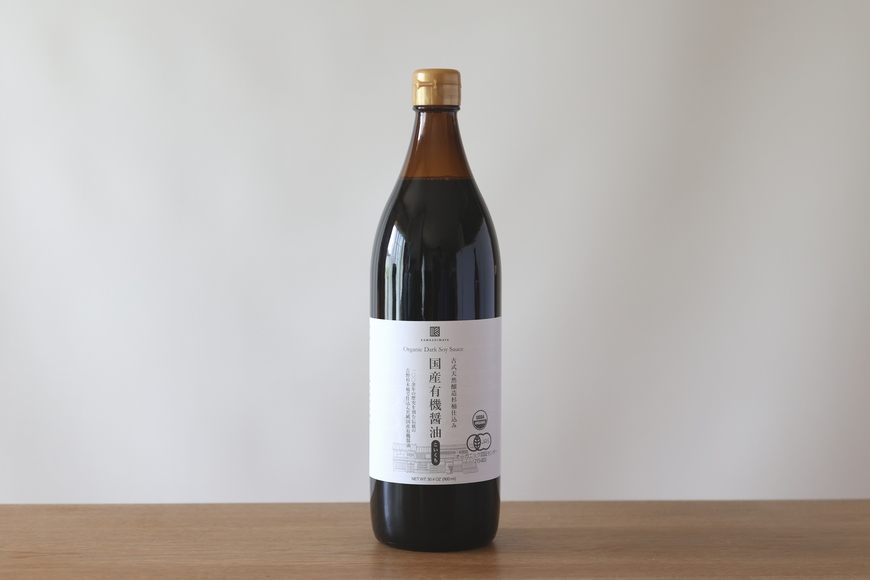 Shoyu has long been famous as a typical seasoning in Japan. Before the Edo period, most shoyu was made from "wooden tubs" made from cedarwood. In the cedar tub, there is a yeast that can only live in the brewery, and by achieving its own fermentation, it produces the unique flavor and richness of the cedar tub that cannot be experienced by metal tank brewing. Shoyu with a deep taste is produced, but it has been steadily decreasing because it's difficult to process and cost-effective. Meanwhile, Adachi Brewery, who cooperated in the commercialization of this product, manufactures shoyu in a cedar tub that has been used for over 100 years since its establishment. We want to deliver this exceptional shoyu prepared in a cedar tub to Japanese and overseas customers. We will provide it with the expectation that customers worldwide will support it. Please enjoy the taste of our shoyu, which is different from the usually mass-produced shoyu. 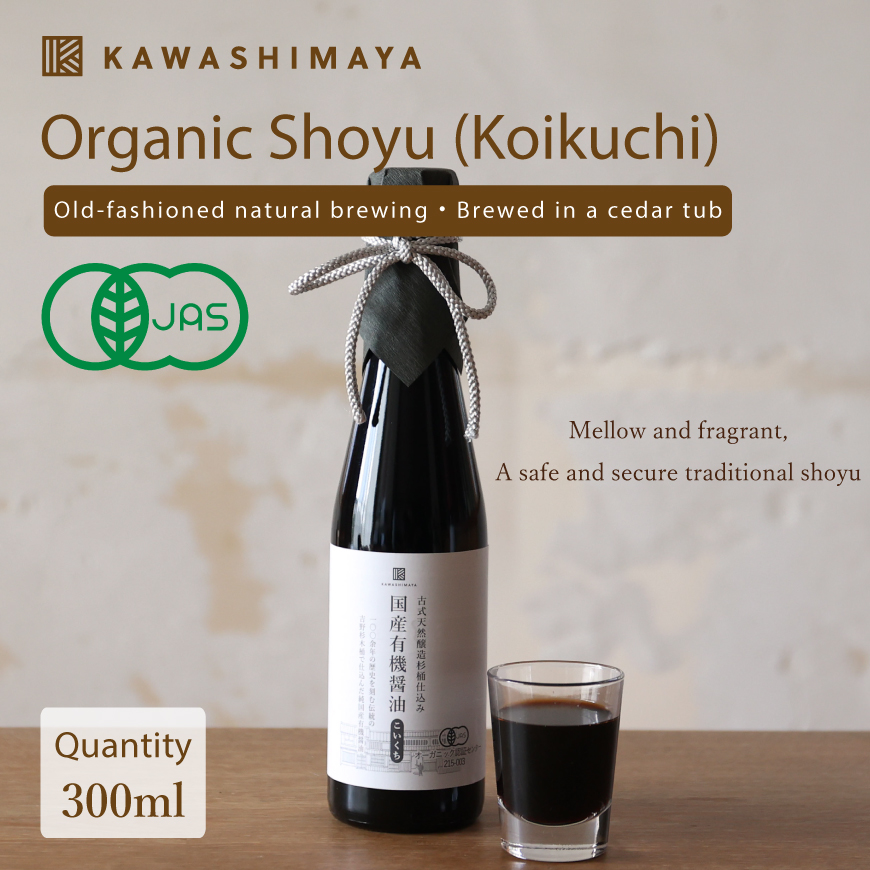 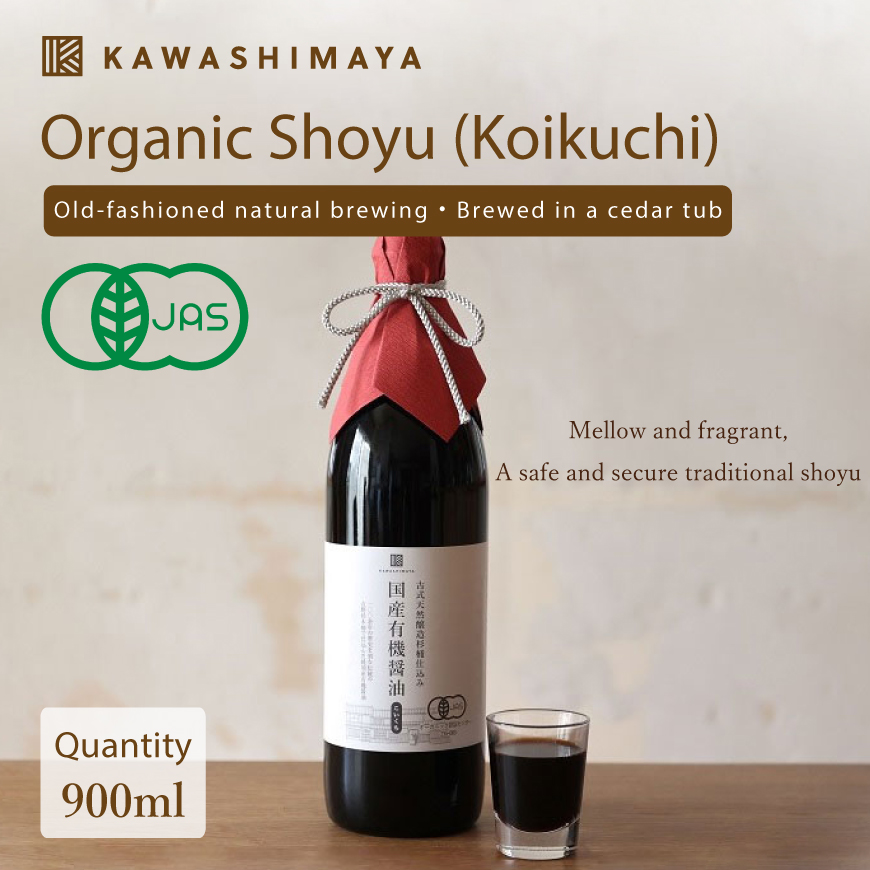 Q & A About Organic Shoyu

What are the raw materials for this domestic organic shoyu?

The raw materials are domestic and organic soybeans, wheat, and natural salt from Ako. We use the famous water of the Sugihara River, a clear stream in Kita-Harima, Hyogo Prefecture.

What are the benefits of brewing shoyu in a wooden tub?

Lactic acid bacteria and yeasts settle in the wooden tub used to make shoyu for a long time and bring out the unique aroma and taste of the brewery, which deepens the flavor of shoyu itself. It is also scientifically proven that glutamic acid, which is an umami ingredient, increases by adding shoyu in a wooden tub. However, the reality is that it is steadily declining because it is not cost-effective.

Why do you stick to the natural brewing of shoyu?

If you artificially control the temperature and humidity, you can shorten the brewing period to sell it more efficiently and cheaply. However, the "deliciousness, depth of taste, and umami" are entirely different from natural brewing. In natural brewing, which takes more than a year, yeast is most active and matures in summer, but yeast is still alive and fermented gently even in the cold autumn and winter, and it is only obtained at that time. Unique flavor and mellowness are added to the shoyu.

I'm trying to live a low sodium life. So, do you sell low-salt shoyu?

Originally, salt serves to prevent shoyu from rotting. Therefore, it becomes necessary to add synthetic sweeteners as preservatives to low-salt shoyu instead of reducing the salt content. Even with additive-free shoyu, you can reduce salt intake by adjusting the amount of shoyu used for cooking.

How is dark shoyu different from other shoyu?

It is said that dark shoyu accounts for 80% of the total consumption of shoyu in general, and it is a perfect shoyu for everyday use that goes well with anything from shoyu to cooking. The salt content is about 16%, which is darker in appearance than the familiar light shoyu (salt content 18-19%), but the salt content can be said to be plain.

Please tell me the recommended usage of this shoyu!

Good quality shoyu complements the ingredients, so you can only feel the difference in the aroma and umami of shoyu when you use it in your daily cooking. The shoyu itself is rich in flavor, so even if you use other seasonings more modestly than usual, you will be satisfied with the result!