It is the best koji fermenter for making koji.It was developed utilizing know-how of brewery and miso store nationwide.With automatic temperature control function, temperature control of koji can be done easily,Even people who make koji for the first time can make fine koji.A model used by many professionals.Up to 40 kg of rice and beans can be fermented at one time.It is especially recommended for those who want to make a large amount of koji. Stainless steel is used for the material, so cleaning can be done easily, so it is safe in terms of hygiene.You can use it if you have a household 100V (normal electricity). You can make a steady quality koji.Recommended for those who aim for koji making on the top level. ※ This item will be sent directly from the manufacturer.Moreover, because it is a high price item, we can not pay by cash on delivery and credit card.Please be forewarned that payment method will be bank transfer only. You can use at homeDomestic koji fermentorIs here 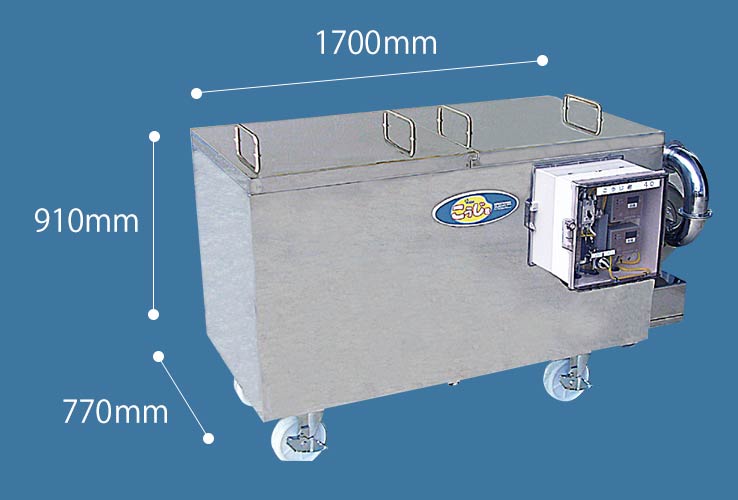 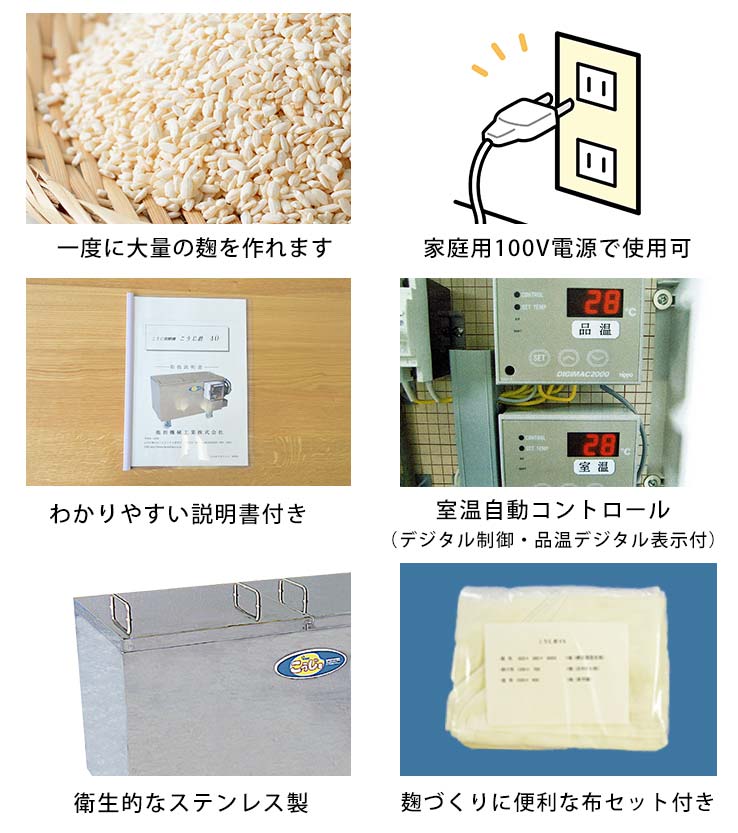 Sanitary made of stainless steel

Use stainless steel inside and outside.Since you can clean up to the corner, you can always make koji in a clean state without bacteria.

Easy to use if you have a household power supply

If you have a household 100V power supply, you can use it anywhere. 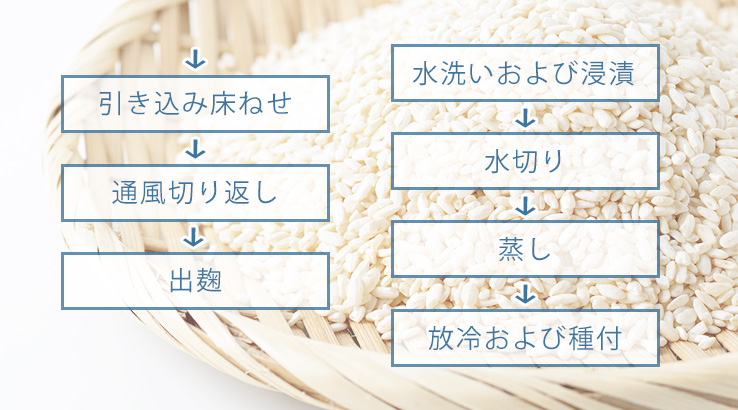 Rice which has ended immersion is drained.It will take from 1 to 3 hours since we will do until the adhered moisture on rice grains becomes sufficient.Do not steam in rice that water drips.

Allow the hot water of the steaming boil to boil thoroughly, and warm the ginseng (preliminary) in advance.If it gets warm enough, I will drain the drained rice. Steam is steamed for 50 minutes to 1 hour after the introduction is over and the steam has uniformly come out of the whole rice.Those that are steamed up sufficiently make rice grain semitransparent, and when crushed with your fingers it collapses uniformly and becomes like a rice cake.

Sprinkle steamed rice on a cloth that is hard to add steamed rice.Rice of rice is finely flattened with wood belly etc. Cool the temperature of steamed rice to 38 ° C to 40 ° C using a fan or the like.I sometimes stir with wood belly etc. so that the top and bottom are at the same temperature.(When the item temperature reaches the prescribed temperature, please stop the fan and work so as not to scatter the koji mold during the application of the koji mold of the next operation.) When the temperature of steamed rice reaches 38 ℃ ~ 40 ℃, flatten the whole ,Steamed half of the prescribed Koji mold equally and sprinkle evenly. Put it on, hurry up on the upper side with your hands, and put on.Mix evenly the steamed rice and flatten again. Again spread the remaining Aspergillus evenly.Once sprayed gently tighten the upper side with your hands. Mix the steamed rice again.Make sure that bacteria adhere to rice grains - grains so that it rotates evenly throughout the steamed rice.Approximately 2000 spores are attached to one grain of rice.(It will sprinkle a given amount of koji mold 2 '' in three parts.) After completing the above work (cold-releasing and seeding work), the temperature put in Koji-kun isIdeal 35 ° Cis.At least 30 ℃ or lessBe careful not to become it, we will work quickly and carefully.

Put the cloth and bag in the koji making machine beforehand and warm it, and draw the seeded rice koji into the koji making machine. About 10 hours after retraction the fungus germinates and after about 20 hours the rice grain loses luster and becomes opaqueA scent like Koji appears and the floor coat is over.

Since the koji rice which was floor-cooked is getting clumped, at the same time as the temperature difference comes out between the outer koji rice and the central koji rice,Mix them out by loosening the lumps so as to eliminate the temperature difference.I will say that this work is turned back and do it in the making koji machine. At this time the rice koji will be easier to get away from each grain.

45 hours after seeding, take out completed koji.This is called koji. We will use it as soon as possible after fermentation. 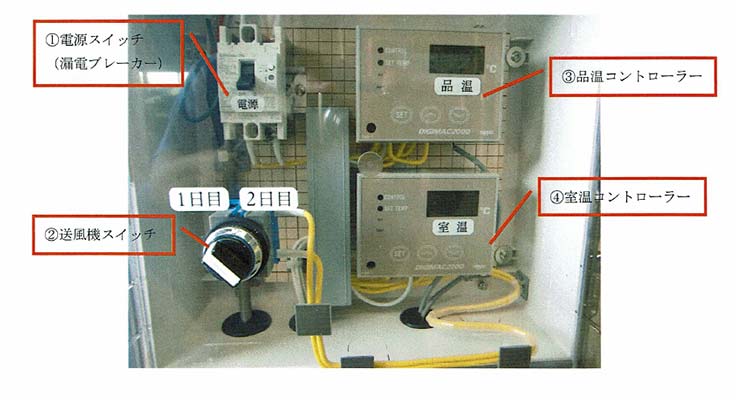 Make sure that the blower switch on the control panel is set to "1st day keeping warm" and warm up the cloth and bags set beforehand.This work is done one hour before the retracting work.

Insert the room temperature sensor into the cage in the bottom net.After that, put water to the place of the arrow.

Put a set of cloth / bags in the main body of the koji making machine and cover it.

Take out the cloth and bags that you put in the main body of the koji making machine.Wet with water on the bottom net spread and spread a lightly squeezed bottom cloth. Next, put a box cloth.

Expand the bag and put it on the left and right as shown aboveJust as I heard from youThen pull in. Gray item temperature sensorSteamed and insert it in the center of rice.

Wrap it with a box cloth as shown above.

I will put a coat as shown above.

Put on the cloth as shown above, and cover it. 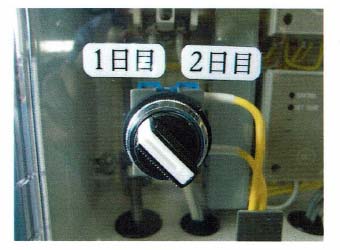 After setting the koji inside the device, the blower switch"Day 1 heat retention"Please confirm that it is.

【First turn back】】 ... Pull-in floor After about 17 hours from bedding,38 ℃ or higherCheck if it is.(If it is 38 ℃ or less, wait in that state.) When the item temperature reaches 38 ℃ or more, remove the lid and quickly loosen the lumps quickly so that the product temperature does not decrease. Flatten the koji, fold the bag with the item temperature sensor in the center. I will put the cloth on top. Place the upper net on the top of the machine and hang the cloth on the net. Blower switch"Day 2 cooling"I will. 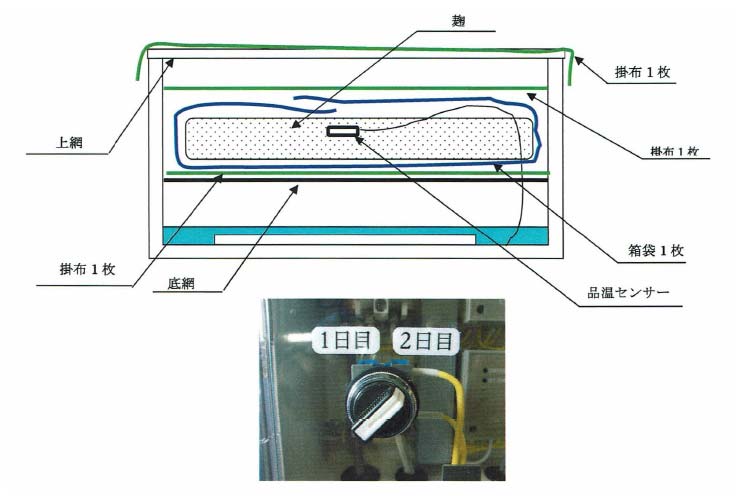 With goods temperature 38 ℃ (after about 5 ~ 6 hours) as a guide please loosen the lump well by hand and perform heat radiation and supplement of oxygen.This is called turning back work. ※ Please do this work quickly so that the product temperature does not drop too much.※ Please do not switch back when the product temperature is 38 ℃ or lower. 【Outbreak】 ... Retracting Bedding About 45 hours after laying in bed After about 45 hours from retraction, it becomes koji and becomes complete. ※ Because the time to switch back is a rough guide, please work according to the temperature (item temperature) of koji and the situation. 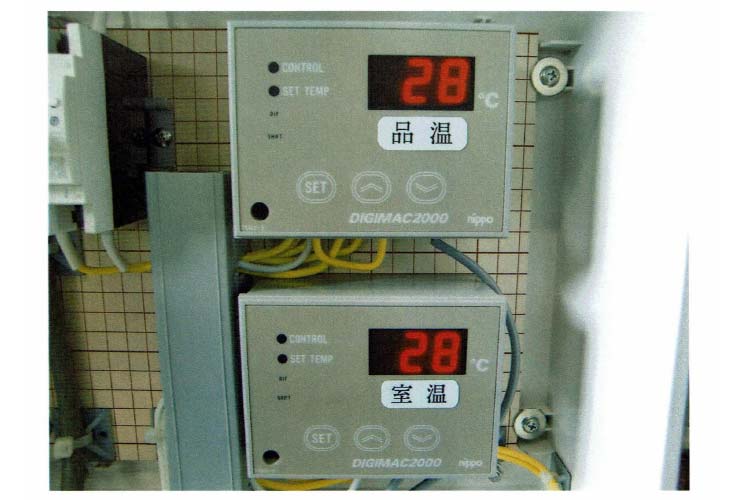 4. If you want to change the set temperature for some reason, follow the procedure below. 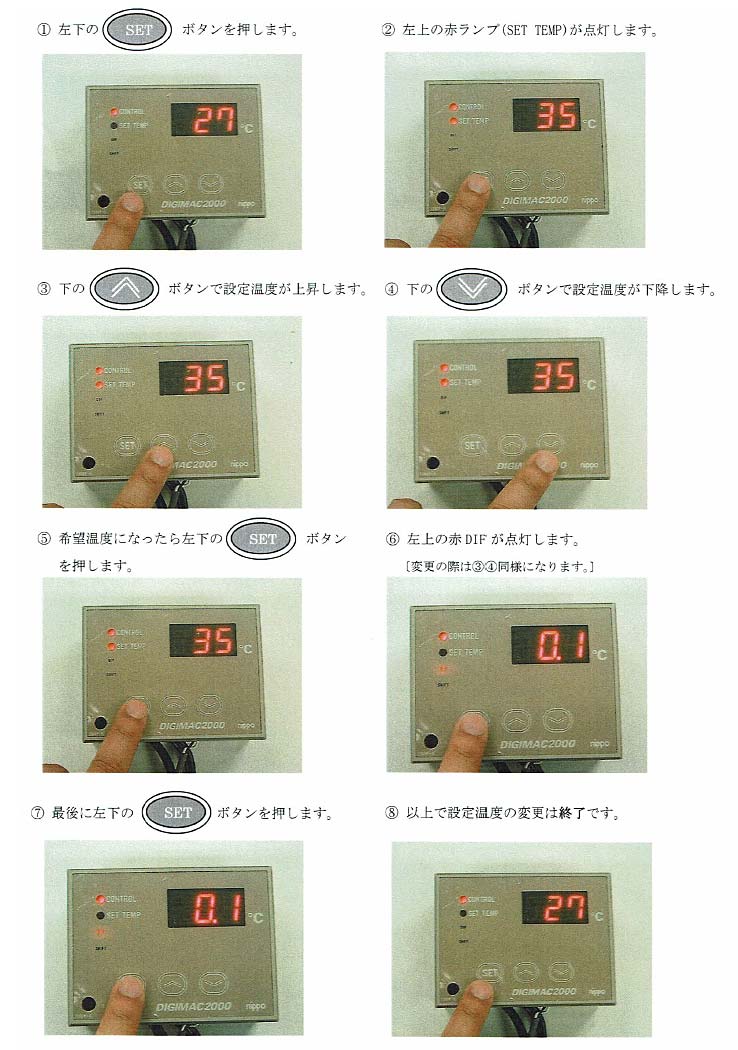 I will show you how to make detailed rice koji on this page.>>How to make rice koji

The payment method of "Koji Kimi 40" is only bank transfer.I will ship as soon as confirmation of payment to the bank is taken. ※ We ask for the transfer fee at the customer's share. 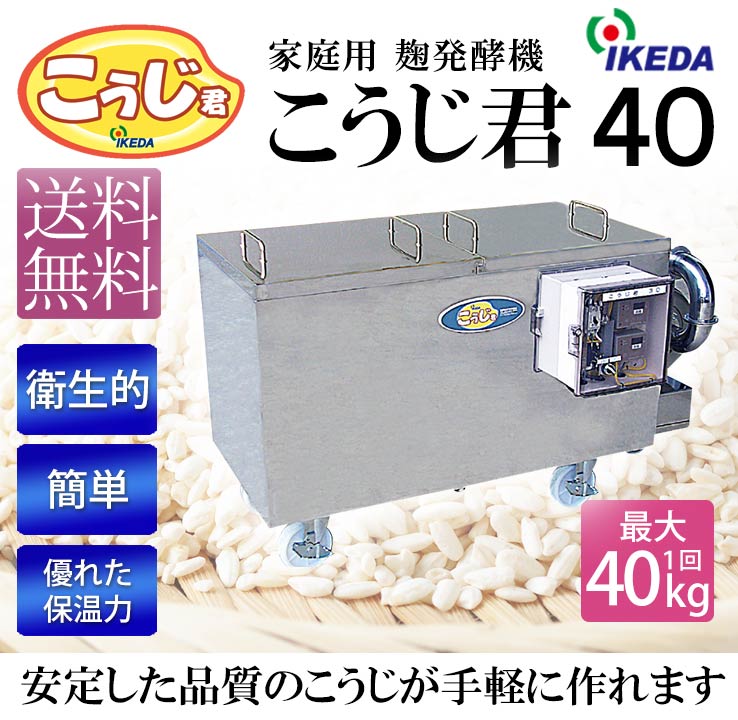