¥9,558
What is Satoshi Hiroshi Hammer laid-back knife?It is a knife made of special steel called V2 steel. Varnished from a carefully selected high quality raw material V2 steel is harmful...

It is a knife made of special steel called V2 steel. Varnished from a carefully selected high quality raw material V2 steel is harmful to the cutting steel, minimizing impurities as much as possible. Keeping high sharpness by not containing impurities will make the lifespan of the knife long. In addition, there is a unique pattern called hammer in the back part of kitchen knife. It is a vegetarian kitchen knife that can also enjoy the texture like taste as used for a long time.

The vegetarian knife is suitable for this kind of food

The vegetable knife kitchen knife is suitable for cutting vegetables as its name suggests. Since there is no tip and the blade is straight, I am good at carving, chopping up the ingredients. Also, because it is made with double edges, sharpening and other maintenance is easy. It is also suitable for memorizing knife skills such as cutting and sharpening.

Although he was trained about the second generation, the young third generation will struggle to pick up Ketchon for developing new demand. While working, when I came to work, I went to the master of Kaigo forging for four years and learned the color of Kotobuki's blacksmith. It is difficult to make any kind of thing, but it was because I liked making things that I kept without giving up. Bar, firebird, knife, 鉈. Although it is not easy to keep making good products with little madness,"There is nothing you can do for others by making it to others." I believe so, I am continuing my efforts.

The genealogy of Monozukuri of Niigata Prefecture Tsubamesanjo goes back to the Edo period. From the early Edo period, it prospered as a place to create "Waka (Wakagi)". At the beginning of the Kanona period, due to the repeated flooding of the Igami River in the Sanjo town center,It is difficult for farmers to earn their living by agriculture alone. Therefore, we invited craftworkers of Japanese nail making from Edo,By being taught, production of Japanese nails will begin in this area. Then a new smithing technology was transmitted, from Japanese nail to sickle and knife etcProducts will also change. At the same time, blacksmiths who inherited the technique of tradition have been nurtured,In the era of Wakasei, blacksmiths started as farmers' side jobs also specialized as blacksmithsIt will become established.

In the Meiji era, the experts of the forge rise sharply. Along with that, merchants started to trade in hardware products, making use of rivers,"Blacksmith City, Tsubame Sanjo" will be known to the world. After the war, the introduction of molds, mass production of products progressed,Not only do the products made in Sanjo circulate widely in the country,It came to go out of the country as well. Many manufacturers mainly in metalworking are gathered in Sanjo town now. In addition to kitchen goods such as kitchen knife, utensils etc, from the instruments crafts and tools,Living goods, gardening supplies etc "are widely produced.

Kitchen knife to cut goods to make it easy to useIt is made with consideration of shape, blade hardness, thickness, angle and so on.Please use the kitchen suitable for the purpose of use correctly.

· After useRinse off the dirt quickly after use, wipe with hot water after sprinkling with hot waterPlease dry it.(The kitchen knife is acid, salt, moisture are enemies.)Storage methodKitchen not used for a long timeDry it and thinly apply the vegetable oil to the whole bodyPlease wrap it in newspaper and keep it in a damp place.· When rust comes outIf rust comes out frequently, please sharpen the blade with # 3000 or more grindstone.Rust falls without putting strength. 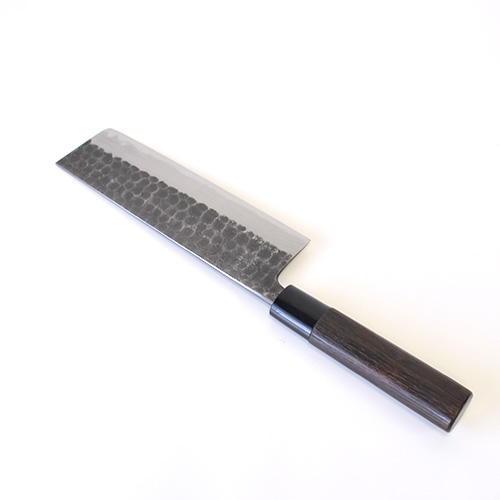 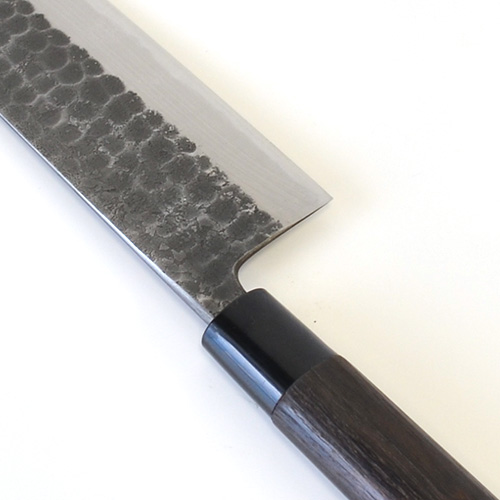 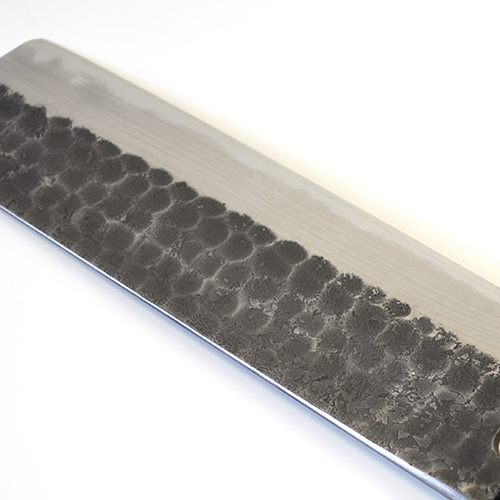 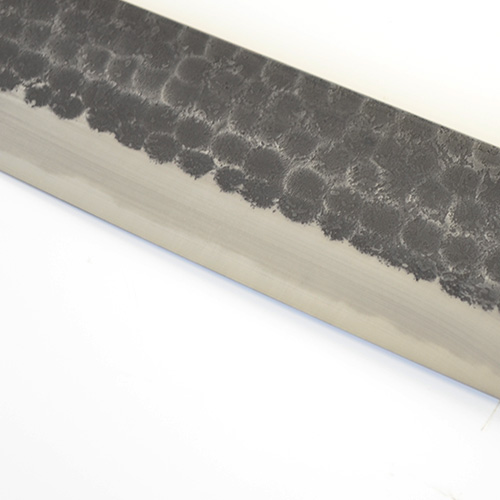 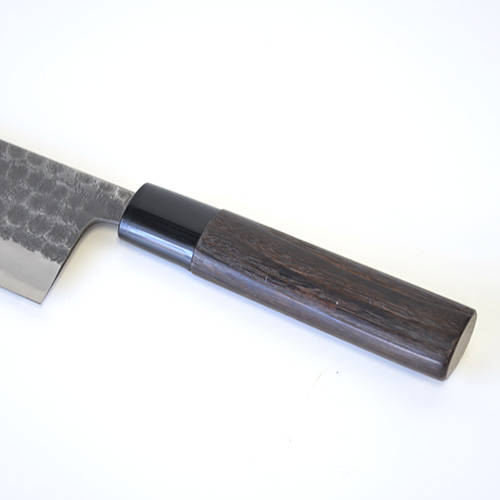 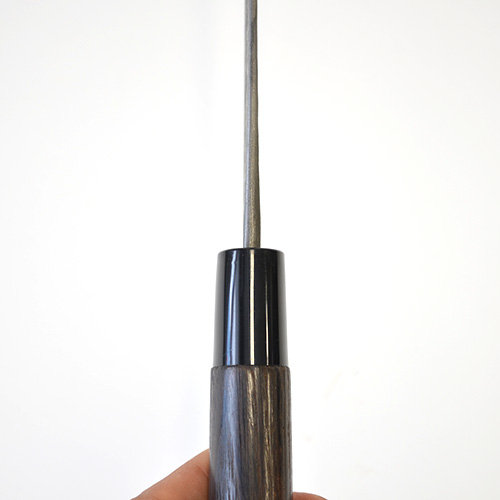 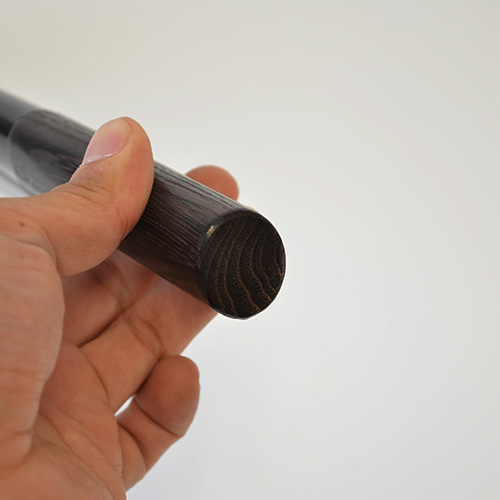 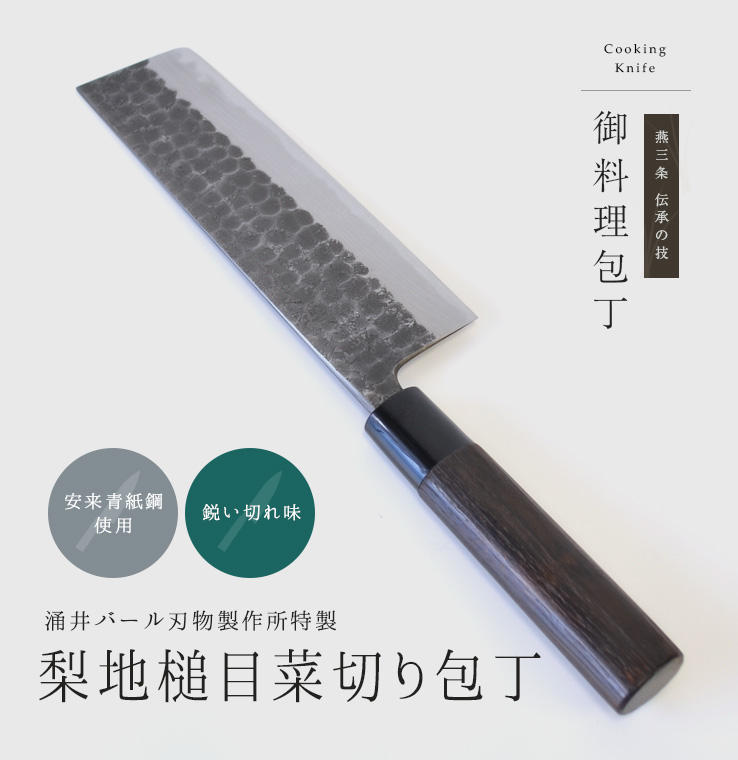