Sake is one of the most popular liquors in the world. It is so popular that almost everyone knows about it. But did you know that technically sake is not a rice wine? Or that sake has a lot of classifications? Also, Do you know how to properly drink and enjoy sake?

Well, we have it figured out for you.

From history to how to enjoy, learn all about sake, a drink that is so good it’s popular all over the world.

In Japanese language, the term ‘Sake’ refers to any alcoholic drinks. The world famous sake drink is called nihonshu (meaning Japanese Liquor) in Japan. To avoid confusion, I will use the commonly known term ‘Sake’ to explain this traditional Japanese liquor. 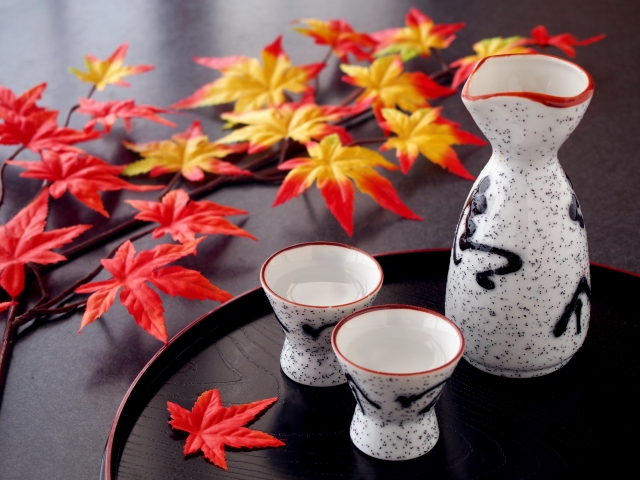 Sake is a traditional Japanese alcoholic beverage. Its alcohol content can vary from 15% to 20% ABV. Sake is produced by producing yeast fermentation on rice. Sake main ingredients are rice, water, yeast, and koji (a type of mold). The type of rice that is used for sake brewing is called saka mai 酒米.

In Japan, the variety of Sake is very broad. Sake is not only produced by big national scaled breweries, but also produced by small local breweries all over Japan. That is why every region in Japan may have their special brand of sake (jizake 地酒).

To understand the taste of Sake, one needs to understand that Sake has all types of flavor. The flavor ranges from dry karakuchi 辛口 to sweet amakuchi 甘口. Sake has an official scale of taste called nihonshu do. It measures the dry and sweet points in order to determine what type of flavor does a certain sake has.

In moderation, Sake can bring many health benefits like reduced risk of cancer, skin enhancement, and less bad effect on the stomach due to its low acidity.

What Qualifies As a Sake?

Sake is often called a rice wine. But technically, it is not a wine. Wine is brewed by fermenting sugar that already exist naturally in fruits. Meanwhile, sake is brewed by converting starch in rice into sugar and then fermenting the sugar into alcohol with yeast. The brewing of sake is similar to beer. Although, calling a sake as a type of beer is a bit of a stretch.

Sometimes, people also have difficulties differentiating sake and soju, a type of liquor from Korea. While both sake and soju is made from rice, soju is usually also made from other types of starch like potatoes or tapioca. Other main difference between sake and soju is the fact that sake is brewed, while soju is distilled. Many people would say that soju is closer to vodka or whiskey.

Due to its unique brewing process and ingredients, Sake deserves its own category as a liquor. 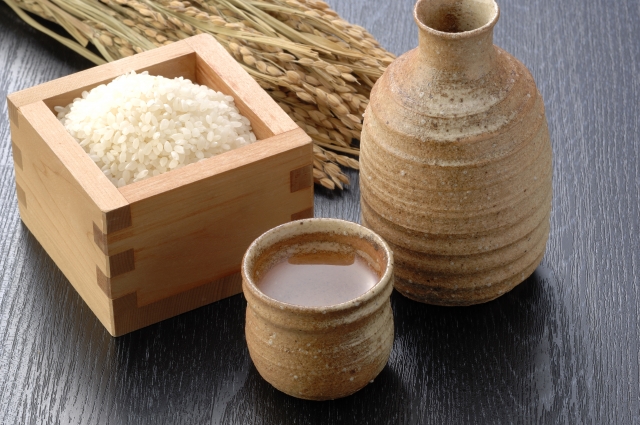 So what qualifies as a sake?

Firstly, It’s made of sake rice, water, yeast, and koji. Secondly, It went through a certain brewing process: The conversion of rice starch to sugar and the conversion from sugar to alcohol in simultaneous steps. These traits are what makes sake unique.

The Brewing Process of Sake

Sake brewing takes a very long time and requires meticulous steps. Each type of sake may have differences in the brewing process. This explanation might be too simple and won't cover up the whole process. But to Summarize, these are the main steps of sake brewing:

Sake brewing existed for the first time when paddy is introduced in Japan at around 4th Century BC. 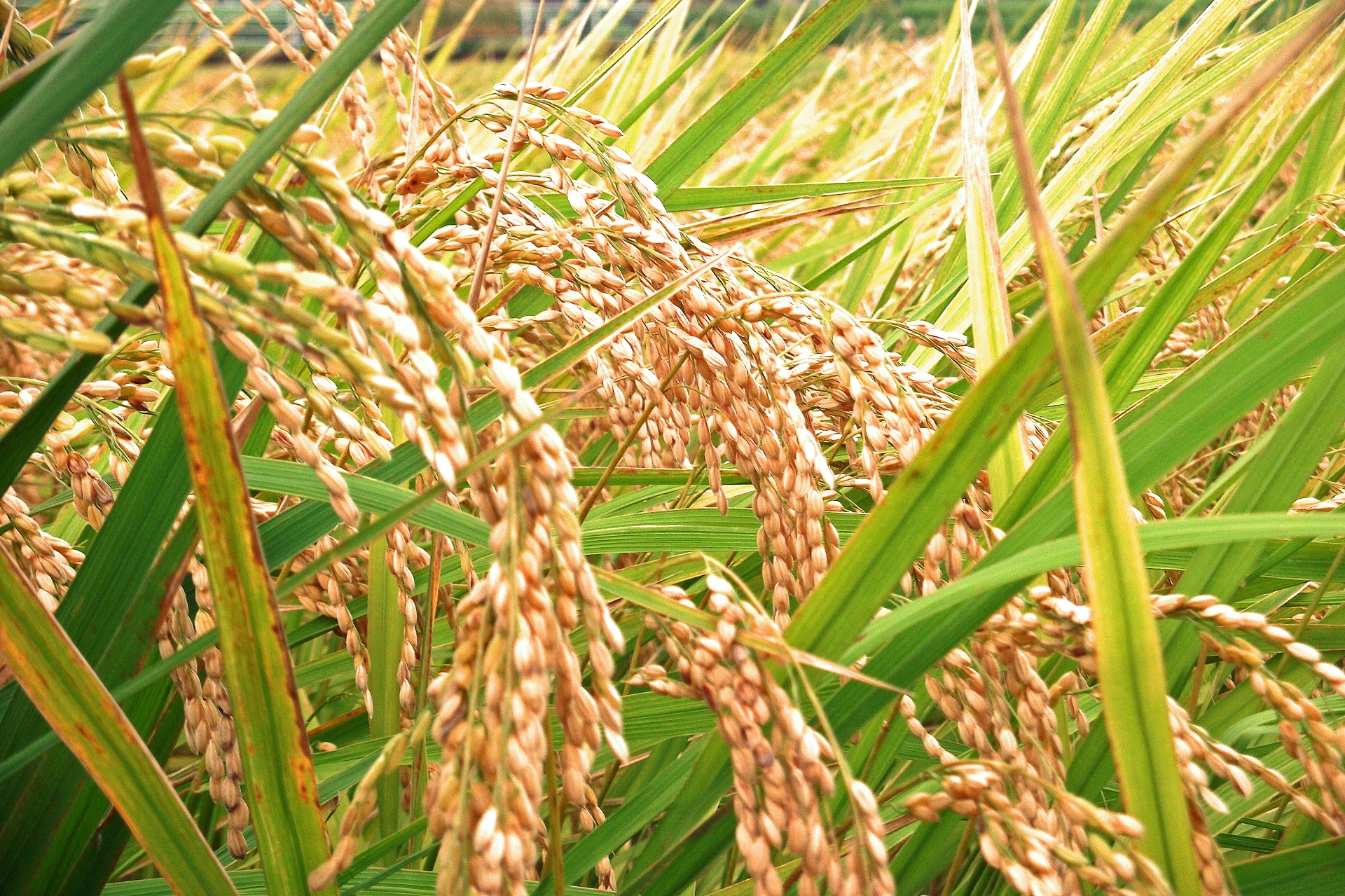 The existence of sake is already recorded in Nihonshoki, one of the earliest Japanese historical literature, finished written in year 720.

At the beginning, sake was mainly produced at the imperial court. It was usually used for religious services and drank by the emperor. Sake was considered a God’s grace.

Sake brewing has been done from many years ago in Japan. In the 12th to 15th century, sake was brewed at shrines and temples. The advancement of the technology in woodworking during this era encouraged the mass production of sake. This led to production of sake by breweries that are not affiliated with shrines or temples in the 16th century.

Sake has a very long history and is loved by Japanese people for many many years. That’s why it is very easy to find sake breweries in Japan that has been producing sake for over 100 to 300 years.

Sake has a system of classification depending on the purity and how much rice grain remains after milling. Sake rice is polished until the outer layer is milled away. This process is important to get the starchy core of sake rice. Outer layer or rice contains more proteins, fats, and vitamins. These components can affect the taste of sake. That is why it is removed. Sake made of highly milled rice is usually more expensive because it takes more rice to make and longer to mill.

Here is a table of sake classification.

Ways to Drink And Enjoy Sake

In Japan, restaurants and Izakaya (Japanese bars) usually serve sake. A lot of izakaya also serve regional sake from local breweries. It is always good to ask sake recommendation to the person who’s tending the izakaya. If you order sake in Japan, make sure to use the term ‘nihonshu’. 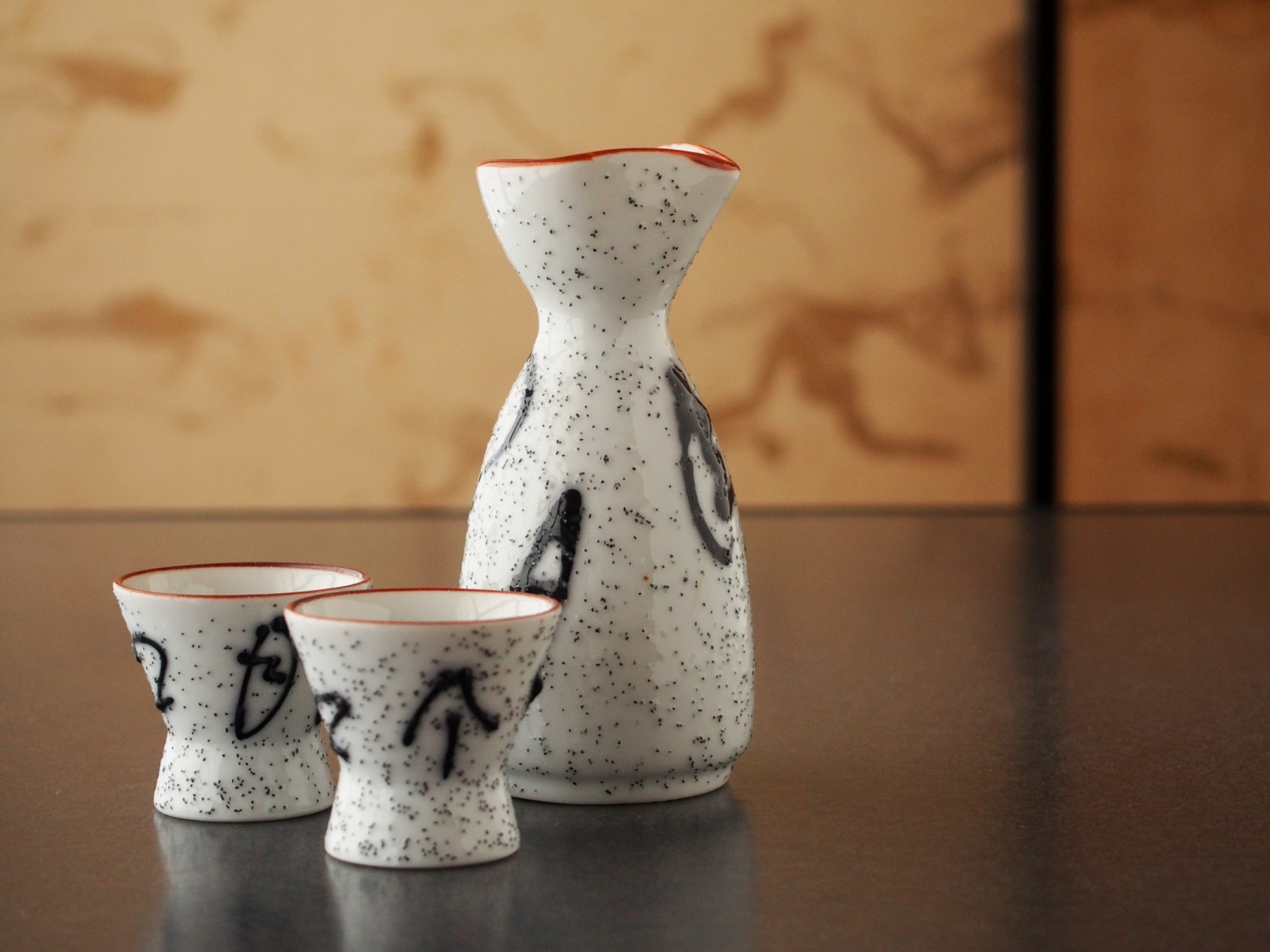 Sake is typically served by glass. Though if you really like the selection of sake, you might want to order by the ‘gou’ measurements. One gou (in Japanese ichi gou 一合) is 180ml of sake. If you order by this size, there are two ways it can be served. One is using a ceramic decanter called tokkuri and a pair of small ceramic glass called ochoko. The other way is more unique: Sake is served with a small glass and a wooden box!

Getting sake in a wooden box called masu can be a fun and authentic experience. By serving sake like this, the person who is tending the izakaya is showing their generosity by purposely overflowing the sake. This type of sake serving is called Mokkiri. A small glass is put inside a small wooden box, and then sake is poured on the glass until it overflows into the wooden box. 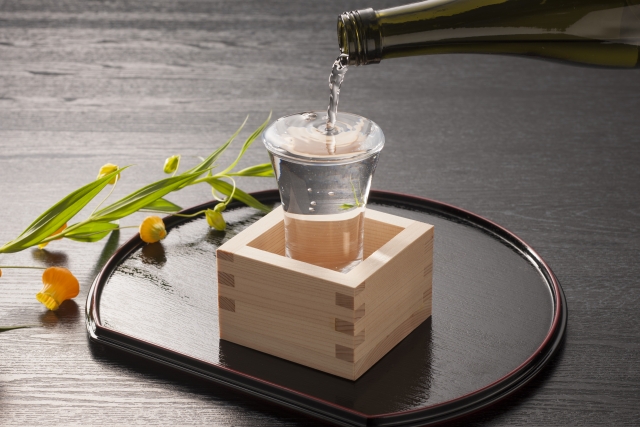 To enjoy Mokkiri, here is what you should do:
1. Tilt the glass a little bit so the brimming sake is poured into the masu.
2. Firstly, drink sake from the glass. Wipe the bottom side of the glass to avoid getting wet. You don’t have to drink the sake in one go. Feel free to enjoy the taste and aroma of sake at your own pace.
3. If you’re finished with your sake on the glass, pour the sake in the wooden box into your glass. Be careful not to spill the sake.
4. Though it is easier to pour the sake into your glass from the box, it is perfectly okay to drink directly from the masu. In fact, you get to enjoy the cypress aroma as you drink the sake.

Hot or Cold? It’s Your Choice!

As one of the traditional foods of Japan, it’s no wonder that sushi goes really well with sake. But did you know that sake also goes well with other foods? 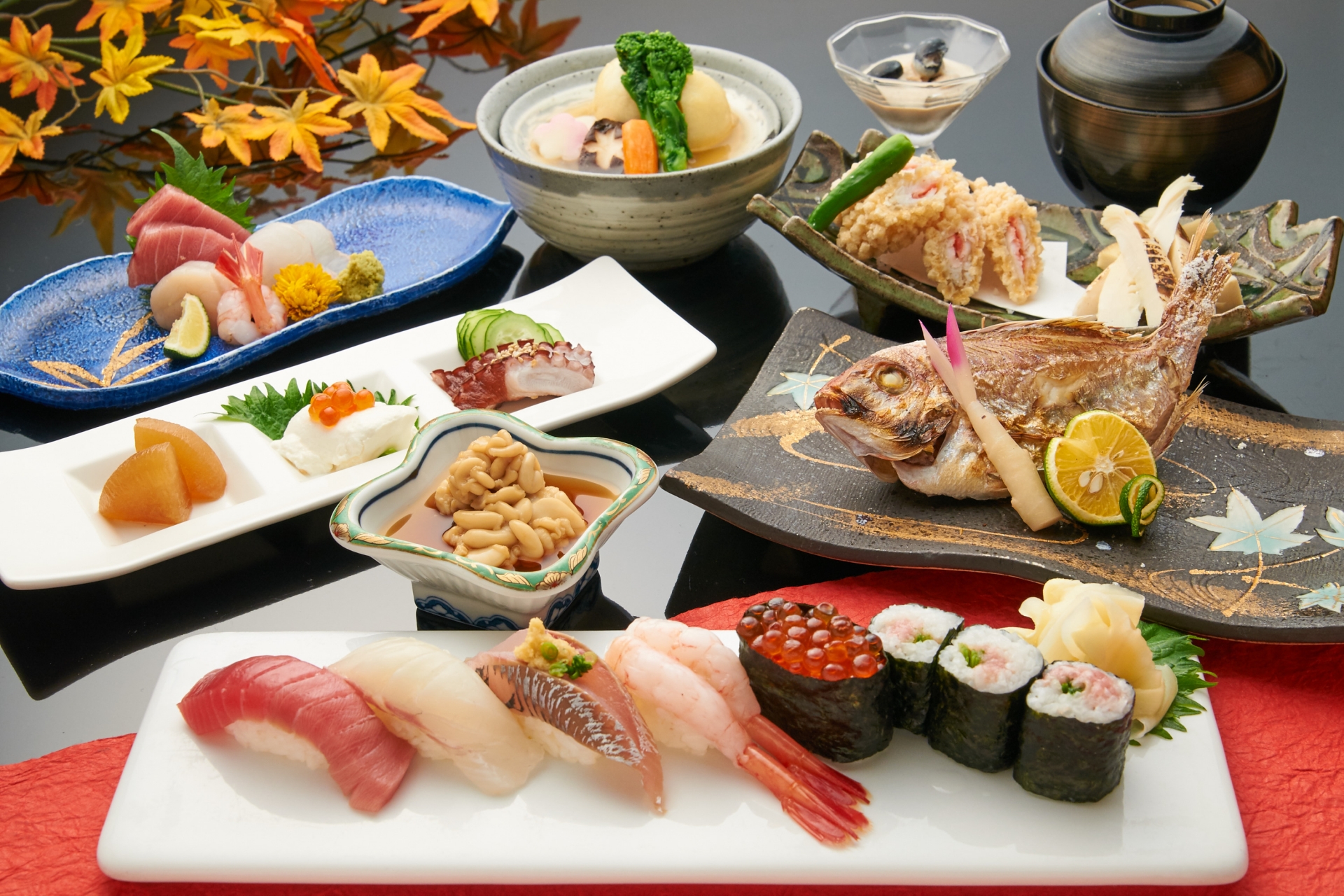 Here is a rough guide to find good pairings for sake.

A Cup of Sake Trivia

If you are served with tokkuri (a ceramic decanter) and ochoko (a ceramic sake cup) when you order sake, there might be a good chance that you will find ochoko with this pattern. This ochoko is an iconic staple of drinking sake in Japan. Turns out, the cobalt circle can be used as an indicator of how drunk you are. When you drink sake, if the blue circle doesn’t look perfectly circle or blurry to you, you might be drinking too much sake. This may vary for each person depending on their alcohol tolerance, but it’s an interesting fun fact. 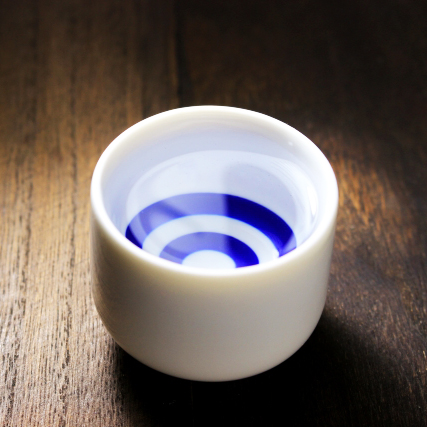 During your travel in Japan, you might find one of these cedar spheres in front of a sake brewery building. This sphere is called sugidama or sakabayashi. It is usually hung in front of the brewery to indicate a completed new batch of sake. Initially, the cedar sphere is green but later on it will turn brown as the months go by. The changing color is a sign of sake maturity. When sugidama is already brown, it means the sake batch is ready to drink. 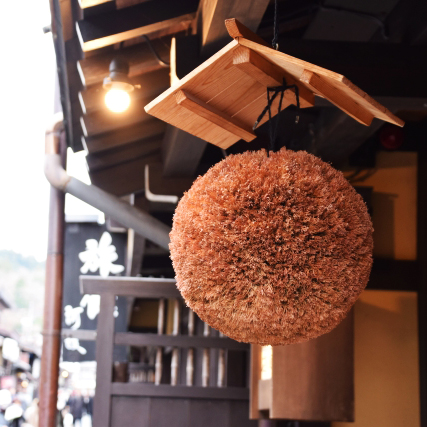 In Edo period (1603-1868) people love sake so much that about 1800 izakaya (Japanese traditional bar) existed. This number accounted for 23% of all restaurants in Japan during that period. 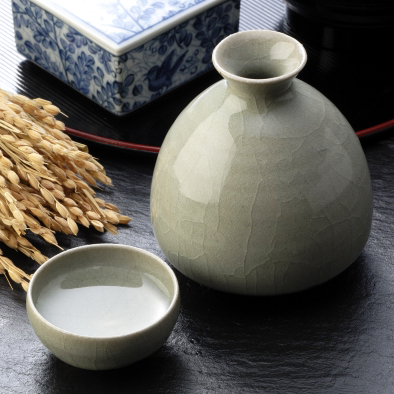