¥1,900
What is Donabe? What is its benefit? and what kind of delicious food can you make from this Japanese traditional crafts?. We would like to give you some detail information about Donabe in the 'Exploring Donabe' article series. This part will talk about the general of What is Donabe?

【Exploring Donabe - Part 1】: What Is Donabe?

【Exploring Donabe - Part 1】: What is Donabe?

Donabe is a Japanese traditional craft.
In general, donabe is an earthenware pots are made from clay with properties ideal for operating at high temperatures.

Not only traditional unglazed pots, in recent years, varieties of clay pots that suits certain environment and sensitivity has also appeared,
such as pots that designed with glaze and donabe pots that compatible with IH (Induction Heating).

When you’re going to home center or Tokyu Hands in Japan, there is a corner where they arranged the donabe in a row.

Which of them that you’d choose?
Sometimes we will feel confuse about which one to choose, don’t we?

You might have trouble such as ‘I want to try to start doing a life with pots!’,
‘What is the difference of this pot from our pot?’
In order to help you, we will provide you a special article titled ‘Exploring Donabe’.

Speaking about the benefits of using donabe,
first thing that comes to mind is; you can use it easily and cook delicious food.

For me and some other people, who usually cooks at home,
there is a day that we are tired from work and don’t feel like cooking.

It’s already troublesome to think about menu, and that’s the time when donabe can be our saviour.

Just pick your favourite ingredients/vegetables,
and you can easily eat delicious plus nutritious food.
It’s just like killing two birds with one stone, oh, in this case we might be able to kill three birds with one stone.
Cleaning up is also easy because we can wash the pot quickly and just let it dry.

Easy to use, able to make nutritious food, and easy to clean as well, donabe makes such a perfect cookware.

How Does Donabe Work to Make Food Delicious?

In fact, donabe contains components that radiate far infrared rays, so the ingredients boiled inside the pot can be cooked deliciously from the core.

Moreover, it has a high level of heat insulation, so it can keep the warmness, which will keep the delicious taste of your food even after some time passes.

In order to enjoy more delicious pot dish,
choosing your favourite design is an important aspect for picking a donabe.

Dish You can Cook with Donabe

We will introduce the dishes that can be done in donabe, from what we can easily do, to something that took a little time and effort. 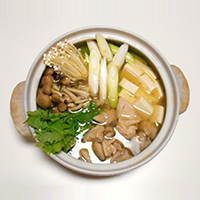 ・Food boiled in water
It’s super easy and simple to do!
It’s the most basic among the basic of hot pot dishes, you can do it only by putting soup and ingredients.
By boiled the food in plain water, it can bring out the umami flavour, it’s also simple and fresh, you can also consume the delicious food regardless of the season. 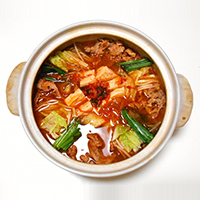 ・Kimchi Nabe
From pirikara nabe (spicy hot pot) to gekikara nabe (super spicy hot pot), the kimchi nabe is a good choice for those who likes spicy food.
It’s a hot pot dish that have a good compatibility with rice, also good for summer stamina dish, and of course suitable as a dish for cold weather in winter. 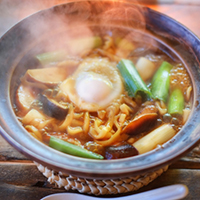 ・Nikomi Udon
Udon boiled in pot is a great dish with plenty of ingredients and delicious taste.
Nagoya specialty miso-boiled udon often comes out as it is in the donabe in stores.
It’s also recommended to add egg and enjoy it as tsukimi udon. 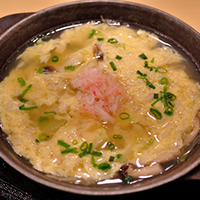 ・Zosui
When you have no appetite during cold, it will be convenient to eat zosui.
Zosui is a mild and thin Japanese rice soup akin to a rice-based vegetable soup.

It is made from pre-cooked rice and water seasoned with either soy sauce or miso and cooked with other ingredients such as meat, seafood, mushrooms, and vegetables.
By eating such a piping hot and very nutritious dish, it definitely will improve your appetite. 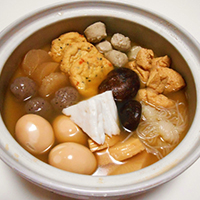 ・Oden
Why is the oden of Seven Eleven so cheap and delicious? Why don’t you try making delicious oden that tastes like Seven Eleven Oden? With the same atmosphere of appearance that is perfectly patched, and firmly soaked soup.
It is donabe dish that you can enjoy while having a good time with your family or colleagues.

The type of donabe is divided according to the soil that is used to make it and the function (the way how you use it).

Because there is various type of donabe, there is also different way to take care of it depending on the type.

We will introduce the variety of the donabe.
We will take an example from the donabe that is available at Kawashima Japan Store. 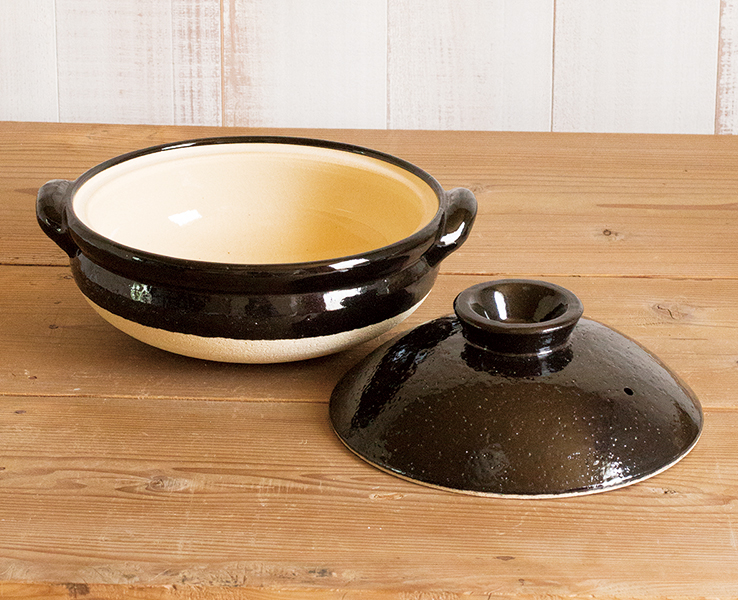 It has a special pattern and texture of coarse soil, also with astringent colour.
Even among the other donabe, the Iga-yaki donabe has an appearance of being more of natural pot.
The donabe will look attractive if you put it in the table. 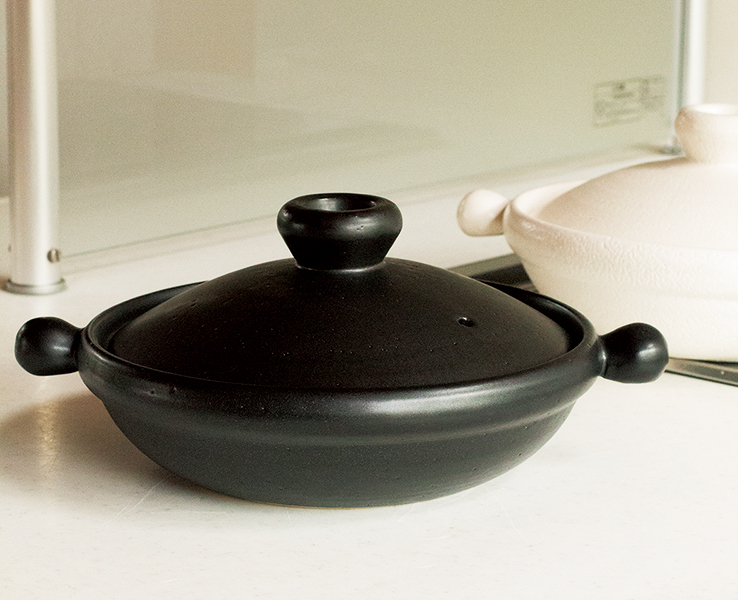 With a lot of market share in Japan,
Banko-yaki (Banko ware) is a type of Japanese pottery traditionally produced in from Yokkaichi City, Mie Prefecture.

It is a famous pottery that is designated as traditional crafts of the country alongside the Iga-yaki.
Because it uses fine soil, the surface is sleek and simple, it also has many designs.

Also, it is characterized by strong and durable against fire because the mineral called petalite is kneaded to the soil.
Even if you cook something strong with strong odour with the donabe, you don’t have to worry about odour transfer, because the donabe will not get smelly.

Banko-yaki donabe is recommended for those who are concerned about the odour transfer problem, and for those who looking for a simple and beautiful donabe.

※Petalite is a natural mineral characterized by glossy finish like glass. Not only for donabe, it also can be used as rice bowl, tea cup or plate. Because it is a natural mineral, even if it is get heated, please do not worry about whether it will affect the human body. 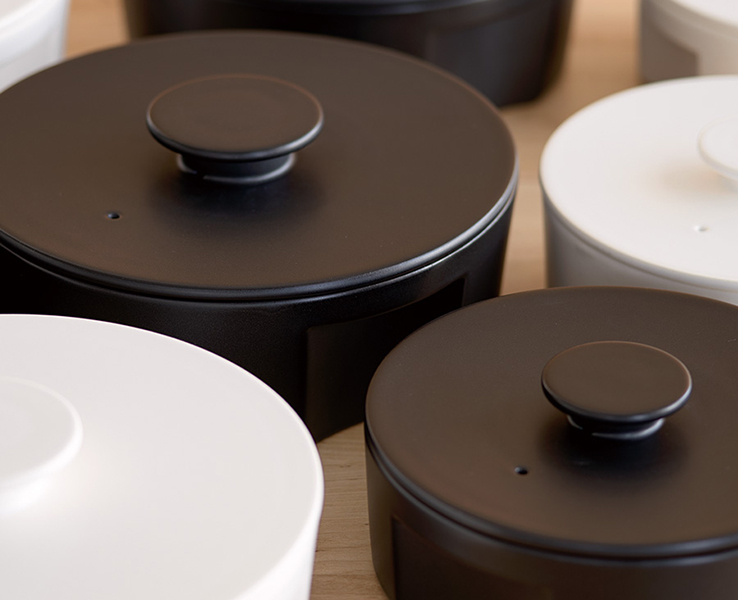 Compared to Iga-yaki donabe and Banko-yaki donabe, Ceramic Donabe
has many vivid designs.

Because it uses fine soil, it has special feature that prevent odour transfer.
So, you don’t have to worry about odour transfer, even if you cook strong scented ingredients.

Also, it’s very attractive because it’s easy to clean and maintain.
There’s also many pots that compatible with IH (Induction Heating), so you can use it easily with latest kitchen technology.

Does it Compatible with Microwave Oven?

Sometimes, there are time when you want to warm up the pot dishes with a microwave.
Although there’s no direct information about it, basically there’s a lot of donabe that is compatible with microwave.

Because the donabe is delicate, you should read the instructions firmly, and use it carefully.

Which Type of Donabe That is Compatible with IH?

Although the use of an Induction Heating (IH) machine has been increasing in the recent years, basically the machine itself doesn’t react to the donabe.

IH is an electromagnetic induction heating method, which structured to be compatible with the pot or frying pan which contains a good conductor so that it will react to the magnetic field generated by IH.

Although there are stainless steel boards which developed by some manufacturers in order to be able to use the pot even with IH, we don’t recommend it because there is a possibility that an unexpected situation may occur with the donabe.
Inside the ‘Exploring Donabe’ article series, we will also introduce about the donabe that compatible with IH, please click the link below for more information.

So, how was the first part of the 'Exploring Donabe' article series?

Depending on the type of the donabe that you choose, the way to take care and maintain the donabe will be different.

So, we will introduce it in the article series of 'Exploring Donabe'.
We would be very glad if you can use the information we have provided to you for your personal reference.

Part 2: How to Cook Rice with Donabe

What is Umeboshi Vinegar and How to Use it